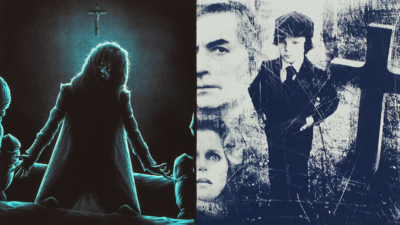 For over 100 years, a three-minute short film entitled Le Manoir du Diable (1896) was one of the first titles to go into scary movies. And although it is indisputable that watching such projects is quite entertaining, there are certain films that seem not only to be spooky, but also cursed…

It is said that the Poltergeist’s curse not only affected the first film but the whole trilogy. Why and how did the curse begin? Supposedly, during the filming of Poltergeist real skeletons were used in some scenes, mostly in that pool scene.

The first victim to suffer from the movie’s curse was Dominique Dunne who played Dana Freeling. The actress lost her life because of her evil boyfriend. Then it was Heather O’Rourke’s turn to play the sweet Carol Anne. After the filming of the third installment was over, the innocent girl with only 12 years old, suffered intestinal stenosis, which the doctors did not diagnose correctly and that is how the beloved Heather lost her life. Sometime later Julian Beck, who was to appear in the sequel to Poltergeist, passed away at the age of 60 of cancer. Will Sampson, who interpreted an Indian doctor in the sequel, passed away ironically from post-operative problems. Although these last two deaths I leave it to you to think whether or not they are the work of the Poltergeist curse. What everyone thought would be one more movie that involved the supernatural, ended up becoming a real nightmare. The first tragedy was when actor Gregory Peck and the screenwriter of the film were hit by lightning several hours apart, while they were on a flight.

Due to these incidents, the production team decided to rent a private jet, but they did not get on it since shortly after taking off, it crashed into a vehicle that, of course, resulted in the death of the pilot’s wife and son.

In addition to all of these accidents John Richardson, the special effects manager of the film suffered a car accident along with his assistant Liz Moore, and the most macabre part of this is that the accident was quite similar to the scene filmed by Richardson. For those who might not know, The Exorcist is based on the real case of alleged demonic possession of a 14-year-old boy, but no one imagined that this would have an impact when filming The Exorcist.

The filming had to be postponed due to a fire that damaged the entire set of the McNeil house, but strangely only one room was left intact: Regan’s room. Also, actress Ellen Burstyn suffered severe spinal damage during the scene where she was thrown to the ground by Regan. The painful experience left her touched for life and her screams of pain we hear in the film are very To these disturbing situations, we must add the deaths of 7 other members including Jack McGowran and Vasiliki Maliaros. Even some of the people involved in the making of The Exorcist passed away from strange causes. The reason this film has been accused to be cursed is mainly because of its filming location: the Dakota building. This building is known for being a haunted or cursed place, with a dark back history…

It is said that numerous satanic rituals, black magic, witchcraft were performed in the building which led to a series of paranormal phenomena and deaths. Despite the dark history behind the building, the filming of Rosemary’s Baby was carried on without expecting the crew and cast to be affected by its curse. The first person to suffer was the composer of the BSO, Krysztof Komeda. The cause of his death was a brain clot, very similar to the cause that one of the characters passed away in the film, coincidence perhaps?

But the real tragedy was what happened to the actress Sharon Tate, a young woman pregnant woman, with 26 years old Sharon Tate was in her residence with some of her friends where all lost their lives by Charles Manson’s cult: The Manson Family. Do you believe these movies are cursed?