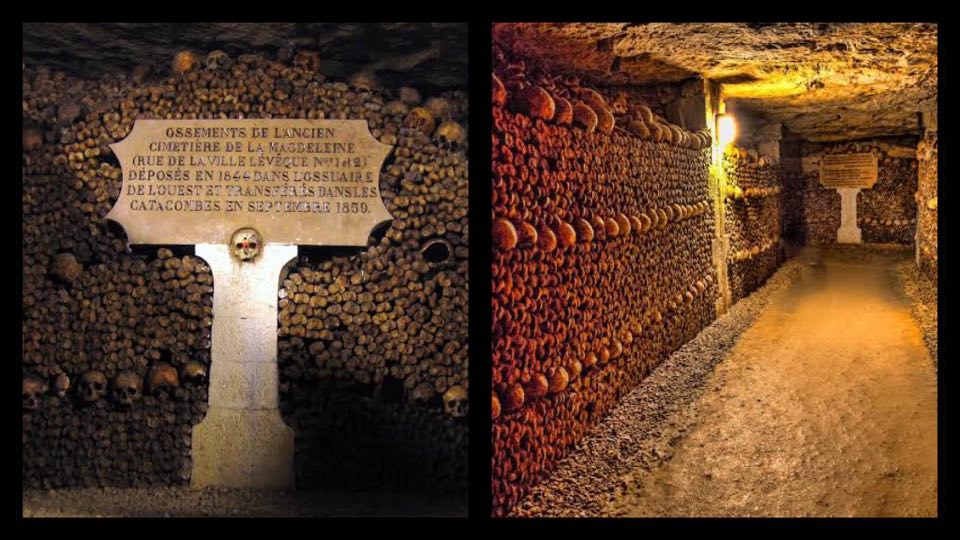 Paris, capital of France, in which thousand of tourists each year visit the City of Light because of its landmarks, cuisine, parks and gardens, shop opportunities, art collections and such.

But the city also has fascinating but terrifying places underneath.

We are talking about the famous Paris Catacombs, underground ossuaries which hold the remains of more than six million people in a small part of a tunnel network built to consolidate Paris’ ancient stone quarries. Here, we bring you 12 facts you probably didn’t know about these gloomy catacombs beneath one of the most visited cities in the world.

1. The ossuary was created as part of the effort to eliminate the city’s overflowing cemeteries. After a series of gruesome Saint Innocents-cemetery-quarter basement wall crumbled in 1774, there was an urgency to move the remains due to the serious health problems that it was causing and by 1786, the remains were transfered to a mine shaft opened near the Rue de la Tombe-Issoire.

2. The process of moving the remains from the cemeteries into the Catacombs took over 12 years to complete.

3. It’s basically a maze in the heart of underground Paris. It’s miles and miles of path. It’s considered dangerous to explore them alone since they are very dark and has lots of narrow passageways or tight tunnels. 4. The authorities have opened and curated parts of the catacombs for the public. But most of the parts are out of reach and it’s prohibited to go beyond that. Les Catacombs De Paris offers tours of the creepy maze that run a little less than a mile and takes from 45 minutes to an hour to explore, which leaves almost two hundred miles of tunnel systems out of limits inside the maze.

5. As mentioned before, the Catacombs are overflowed with the remains of millions of Parisians so it’s one giant underground burial system. The cave is actually deeper and longer than you ever imagined so there are many entry points into the Paris Catacombs. For years, people have shared to the world how to find them. However, that increased illegal foot traffic inside the uncharted paths of the underground ossuary.

6. Quarries were dug out where limestone was mined centuries before. So, much of the tunnels are flood with waist-deep water as they are exposed to natural cracks in the rocks and underground water systems.

7. When the remains were moved into the Catacombs, the bones were dumped in piles, completely disorganized. So, Louis- Étienne Héricart de Thury and his team, were in charge to stack femurs and skulls to form art walls. There’s also sculptures made by Francois Décure. He carved images of the Quartier De Cazerne, Port Philipe, and even the Port Mahon prison.

8. There lies the remains of remarkable people such as Charles Perrault, author of well-known stories like “Cinderella” and “The Sleeping Beauty” or French fabulist Jean de La Fontaine and painter Simon Vouet, among others. 9. There’s a cultivation of mushrooms into the Catacombs. As weird as it sounds, there are several stories about how this started but one says that deserters of Napoleon’s army hid there and somehow found that it was the perfect environment for growing mushrooms. This little secret spread along other farmers who started to do the same. This practice still exists today and produces mushrooms with an exceptional flavor.

11. The Catacombs have been used as a hideout, to throw some secret parties, heist and many more things.

Napoleon’s army used to hid over there as well as the French Resistance used the tunnels to organize and plan for attacks against the Nazis who also used them to place several bunkers.

The Catacombs were once used to pull off a nefarious heist not so long ago. Back in 2017, a group of thieves drilled through the limestone walls to steal a collection of vintage wine with a value of nearly $275,000.

There are also stories that claim King Charles X would throw secret parties in the tunnels when he was merely the Comte d’Artois as well as many musicians have held prohibited concerts halls for years.

Police even discovered a fully equipped cinema-cum-restaurant in a large and previously uncharted cavern back in 2004.

12. There’s a group of people known as cataphiles who like to spend their time inside the catacombs. They consider themselves as urban explorers and many murals and graffiti found underground were most likely made by them. Would you adventure yourself into the Paris Catacombs?