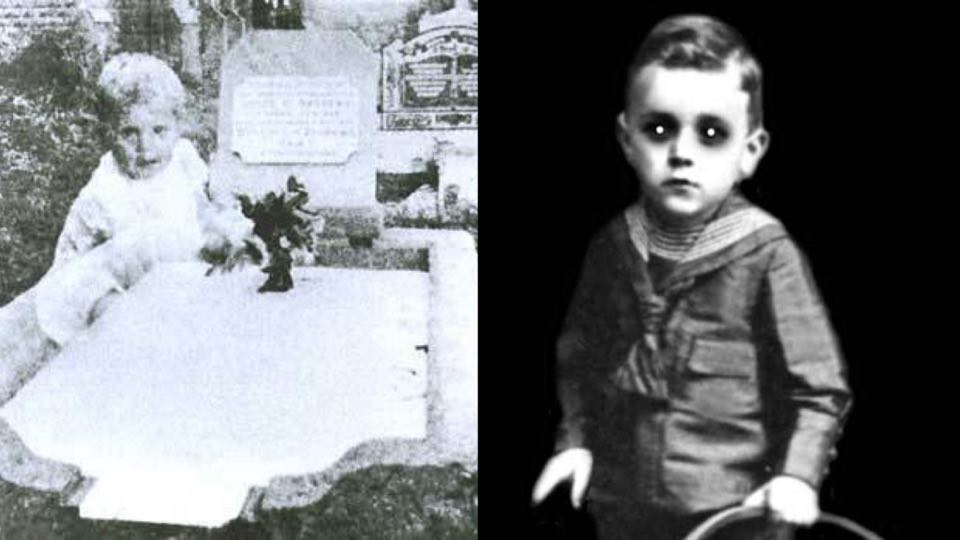 Those pictures in which ghosts have been captured, are always so intriguing. However when it’s about children, they can cause commotion to people for losing their lives at such a young age. A man took this photo of a mysterious girl at a building in England that was burning in flames in 1995. The intense heat of the flames led people to speculate that it was impossible for a person to be alive and so calm like the girl in the photo, so they thought she must be a supernatural being. Some citizens assumed that the spirit was Jane Churn, a girl who accidentally set her house on fire in 1677.

The ghost baby in Queensland cemetery The mid-1940s, Mrs. Andrews went to a cemetery in Queensland, Australia, to visit her teenage daughter’s grave. She decided to take a photo of the tomb and captured a baby in the photo. The woman didn’t recognize the baby and claimed that there were no children in the cemetery that day. This photo was captured by Adam Ellis. He’s a cartoonist from New York and has captivated thousands of Twitter users with his story of Dear David, the spirit that lives at his apartment.

The girl on the train In San Antonio, Texas, this famous photo shows the spirit of a girl on the train tracks. According to local history, a bus full of children was hit by a train, so the little ones lost their lives and now hit the cars that are stopped near the tracks. It’s said that they do this to prevent to get the same destiny as them.

The girl in the farm In 2008, a photographer was taking photos on a farm in England, before a wedding took place. After checking his digital shots, he was surprised to see the glowing and ghostly figure of a girl peeking out of the corner of a building. The bride and groom then asked the farm workers if they had ever seen a ghost before and in fact, many of them had witnessed the figure of a girl in a white dress.

Girl at a Mexican graveyard

Facundo, a famous Mexican television host, decided to do an investigation in a cemetery but ended up paralyzed when he saw a girl crying at the edge of a grave at one in the morning.

The ghost of Amityville This creepy photograph was allegedly captured at the Amityville house during an investigation made in 1976. It was led by paranormal experts Ed and Lorraine Warren. An infrared camera was installed on the second floor to film throughout the night. Each image was empty of paranormal phenomena, except for this one in which the ghost of John DeFeo can be seen. He was one of the children who lost his live in the house at the hands of his older brother who said was under the influence of a demon when he committed the horrible act.